← back to
Indexical
Get fresh music recommendations delivered to your inbox every Friday. 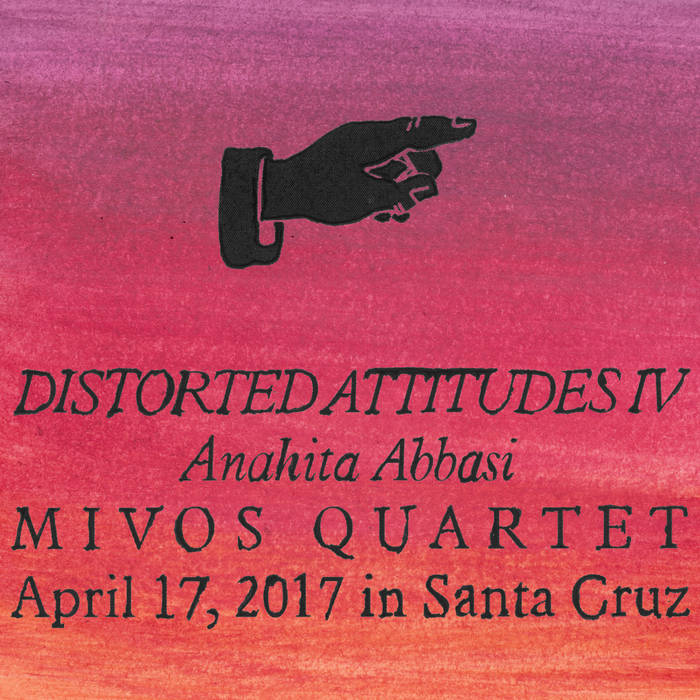 Fiagd If you like it, you should try to listen to works of such composers as Lachenmann and, especially, Grisey. Maybe you'll find something very interesting in there.

Thanks to Anahita Abbasi and Mivos Quartet for making this work available. This is from the first session of a series we hope to have funded through subscriptions at theessentialindexical.bandcamp.com/subscribe

Distorted Attitudes IV/ Facile synthesis is the fourth piece in this cycle, which is an observation on various perspectives and mindsets in society, some of which we would describe as distorted.

Distortion is the alteration of the original shape (or other characteristic) of an object, image, sound, or waveform. Distortion is often unwanted; in some situations, however, it is desirable.

In short, the violins and the viola are becoming cello. They are on the one hand different shapes of a cello, and on the other hand, individual beings with their own characteristics and qualities.

The difference between their shapes has a vital influence on the quality of their sound. Within their own physical limitations, they embody individual attitudes even while following the same process towards a shared end result.

All the instruments are treated both as though they were one and as though they were different qualities of a scattered unity. The constituent elements of separate materials, sound qualities, and abstract entities will transform into a single unified entity. Struggling to unify, Facile synthesis challenges whether such reconciliations are possible.

“Anahita’s music is powerful and vigorous and consists of multiple layers. As it is also vivid from the titles of her works such as Dialogues, Situations, Distorted Attitudes, and etc; she investigates and gesticulate thoughts and feelings; At the same time it is manifestation/ observation of a scene or multiple scenes, which occur simultaneously; the content of which, however, never becomes more concrete, but remains delicate at the border. She has the tendency to take us with her music on a mystical, puzzling journey and leave us within our thoughts, to find out the “ ending” ourselves.”… ( Ernst. M. Binder)

Anahita Abbasi’s works have been performed around the world in various festivals such as: Darmstadt Ferienkurse, Ircam (Manifeste akademie), Matrix ( Experimental studio des SWR), Impuls festival, Time of music, Atlas festival and etc. In 2014, she received the work-scholarship from Experimentalstudio des SWR in Freiburg. The Recipient of 2015 Morton Gold ASCAP young composers award, is also nominated in 2017 as the “women composers of our time” along side with Kaja Saariaho and Isabel Mundry. She is one of the founders of Schallfeld Ensemble in Graz, Austria.

Anahita Abbasi graduated from the University of music and performing Arts Graz, Austria; where she studied music theory with Clemens Gadenstätter & composition with Beat Furrer and Pierluigi Billone; while working closely with Georges Aperghis, Franck Bedrossian and Philippe Leroux. Anahita is currently residing in San Diego and pursuing her Phd in Composition with Rand Steiger at the University of California San Diego.

Nightmares on Wax and Bremer McCoy stop by with their sublime new LPs.